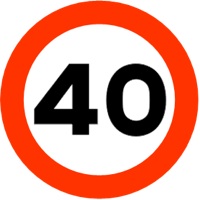 This week the Department issued ’40km/h – slow when lights flashing’ signs as a response to the Union’s campaign to enhance safety when members are working on roads. Today’s In Orders instruct members to affix the signs to the rear of appliances when working on roads. Only problem – the signs are affixed by magnets, and the rear of the appliance is made of aluminium. You don’t need to be a rocket scientist to see what’s wrong here.

Furthermore, the Department has not provided any guidance as to when the ’40km/h’ sign should be displayed or in what circumstances the ‘Hazards Ahead’ sign would be more appropriate. Logic would suggest that both are equally applicable and that there should be two separate signs.  While the Department decides how to sort this out the Union reminds members that safety at MVAs is best addressed by leaving the appliance in a fend off position to protect crews at work. If this means the road is cut off then it is up to the RTA, or the Police, to provide safe traffic handling measures.

Members are advised pursuant to Rule 47 that the State Committee of Management has resolved to adopt a number of Rule amendments. The effects of the amendments are to remove references to another organisation. The proposed amendments can be found [download id=”27″].

If the State Secretary does not receive a request by that date then the amendments which the State Committee of Management resolved to be made shall, subject to the provisions of the Act and the Regulations, come into operation on 27 May 2010.

The Department is currently carrying out internal investigations that involve the seizure of records at various stations. These records are the Department’s property, and they are entitled to take possession of them. What they are not entitled to do is advise members that they cannot seek advice from the Union on this, or any other matter affecting your employment. If in doubt, contact your delegate, SCoM representative, or the Union Office.

Last weekend it was reported that Reginald John Little, one of Australia’s worst mass murderers, was released from prison almost 35 years after starting a fire that killed 15 people in a Kings Cross hotel. It turns out that since 1993 Little was on day leave to work as a volunteer with a local RFS unit.  In 2001 he was promoted to Captain of that Bush Fire Brigade. It appears that in firefighting, like life, you get what you pay for.