The FBEU was formed in an era when a number of important unions were established. Workers in Australia came to realise that their only hope of achieving better quality of life was by joining together in an association representative of their common interests.

Our Union has continued to pursue those goals originally set by our founding members.  We have not adopted a narrow parochial approach and realise that national and international questions impact on firefighters’ future welfare. Because of this, the Union is held in high esteem within the trade union movement.

Although the leadership of the Union and their employers have changed over the last 100+ years, the relative positions of both parties has remained the same.

Throughout the many bitter struggles the Union has continued to seek better conditions of employment and job satisfaction for its members while the employer endeavours to fulfil its responsibilities in providing fire protection for the community at the cheapest possible price. Thus the class struggle between the worker and employer continues. 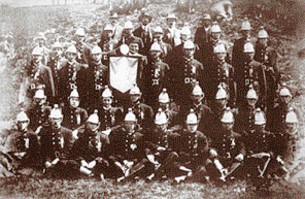 Founding Members of the Fire Brigade Employees’ Union of NSW, 1911. Standing immediately to the right of the standard is the first President, Charles Butcher.

Key Dates in the History of the FBEU

1910 – The Union is formed – the first trade union of firefighters in the nation.

1911 – Officially registered on 7 January as the Fire Brigade Employees’ Union of NSW (the name reverted to 100 years later), but officers excluded.

1923 – Union forces a further reduction in firefighters’ weekly hours to 120, but officers remain on 138.

1927 – Union campaigning secures a further reduction to an 84-hour week and two-platoon system. 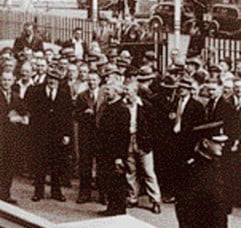 1939 – A NSW parliamentary select committee recommends a 52.5 hour week for firefighters but is ignored. Instead, firefighters are awarded a 78 hour week and Officers drop to 112.

1948 – Officers’ and firefighters’ Associations formally amalgamate and are registered as the NSW Fire Brigade Employees’ Union. Officers join firefighters on strike for the first time, over pay.

1949 – A splinter group of senior officers form a Senior Officers’ Association, independent of the new FBEU. Union activist Maurie Stolmack becomes the first permanent firefighter on the Board of Fire Commissioners (the Board).

1951 – The Union applies to the Industrial Relations Commission for a 40-hour week.

1953 – The Board moves to have the Union deregistered and fined over a limited-duties strike for a 40-hour week. 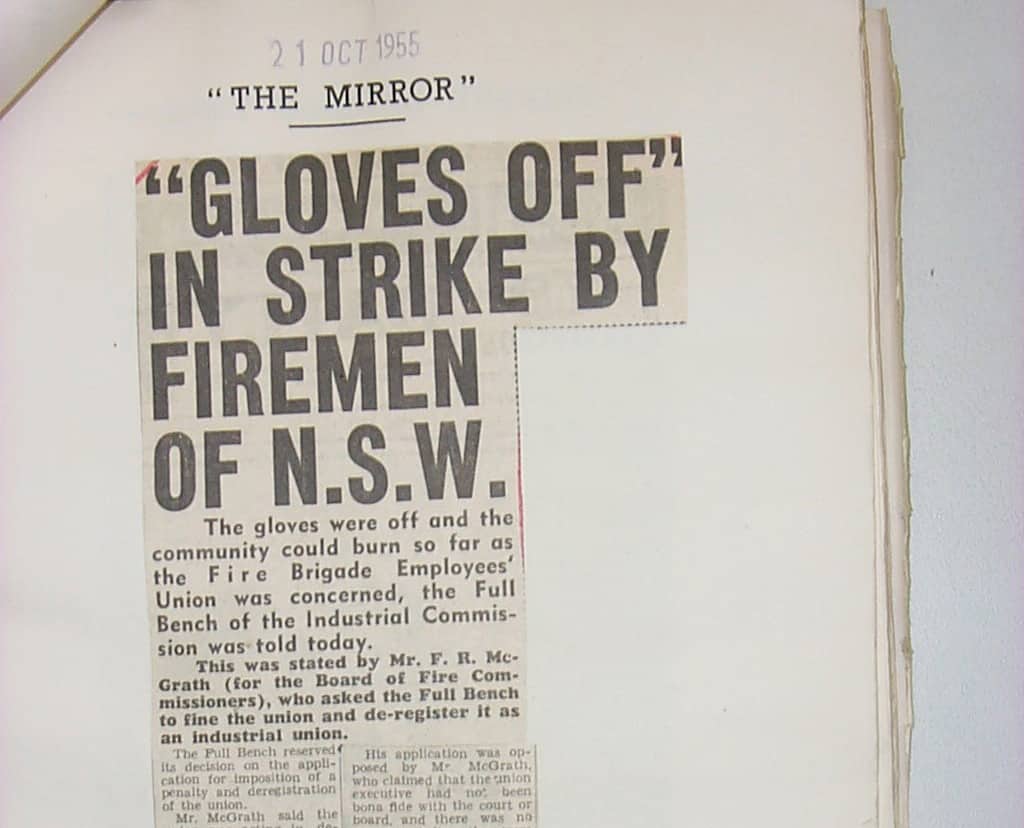 1955 – NSW Parliament finally legislates for a 40-hour week for firefighters. Disputes over its implementation lead to an 11-day strike during which the Union is fined and temporarily deregistered.

1960 – A limited-duties strike leads to a fine and deregistration for 28 days, but breaks the wage into component parts. After a six-year legal battle, the Industrial Relations Commission confirms the Union’s right to cover retained firefighters.

1963 – For the first time all firefighters from Acting Chief Officer down hold a partial 24-hour stoppage. The Union secures a separate award for retained members. Following the on-duty death of a member, the Union steps up its campaign for compressed air breathing apparatus.

1969 – The United Firefighters’ Union of Australia (UFUA) is first registered, but the FBEU withdraws its support complaining of undemocratic rules.

1970 – The High Court rules the UFUA can not be registered, ruling that firefighting is not an industry.

1972 – A series of strikes over wage claims cause the Board to lodge an application for the Union’s deregistration.

1973/4 – A series of further strikes over wage claims lead to major gains for members.

1975 – The Industrial Relations Commission awards the 10/14 Roster. The Senior Officers’ Association and FBEU formally amalgamate, finally making the FBEU the one industrial union for all NSW firefighters.

1977 – Union protests lead the Wran Labor Government to agree to place the Board of Fire Commissioners under Ministerial control.

1978 – Stoppages and bans over obsolete equipment force the Government to form a major Committee of Inquiry into the NSW Fire Brigades. 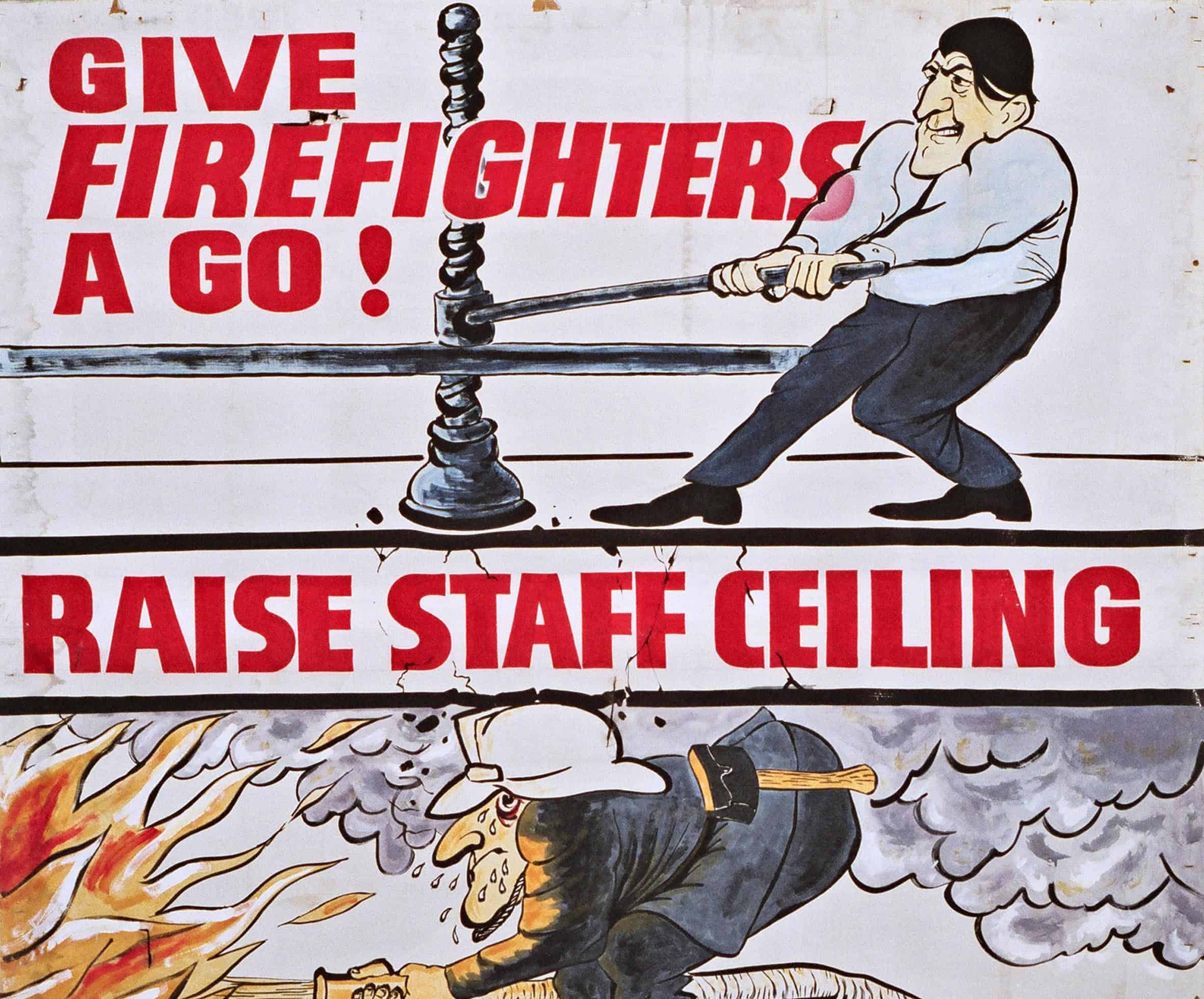 1985 – A limited duties strike succeeds in forcing agreement on the introduction of the 38-hour week. The first women to be employed as permanent firefighters, and FBEU members, commence.

1987 – A threatened staffing freeze is overturned under the threat of industrial action.

1989 – The Greiner Coalition Government dissolves the Board of Fire Commissioners, which is replaced by a government department, the NSW Fire Brigades.

1990 – The UFUA is successfully registered with the support of the FBEU. The Union wins a 15 year struggle for modern protective equipment, replacing the firefighters’ century-old ‘lion-tamers suit’.

1994 – Industrial action, with the threat of escalation, forces the Fahey Coalition Government to meet Union demands for a 13% wage increase without trade-offs.

1996 – Threat of industrial action leads to the opening of the first new 10/14 station in more than a decade. Agreement with the Carr Labor Government for a new construction and staffing program, the largest since the 1920’s.

1997 – The Union secures major gains for retained members, including a single rate of pay for all work performed, as part of a successful 18% wage campaign for all firefighters. A NSW Rural Fire Service and complimentary joint fire services’ committee, with FBEU representation, is established. 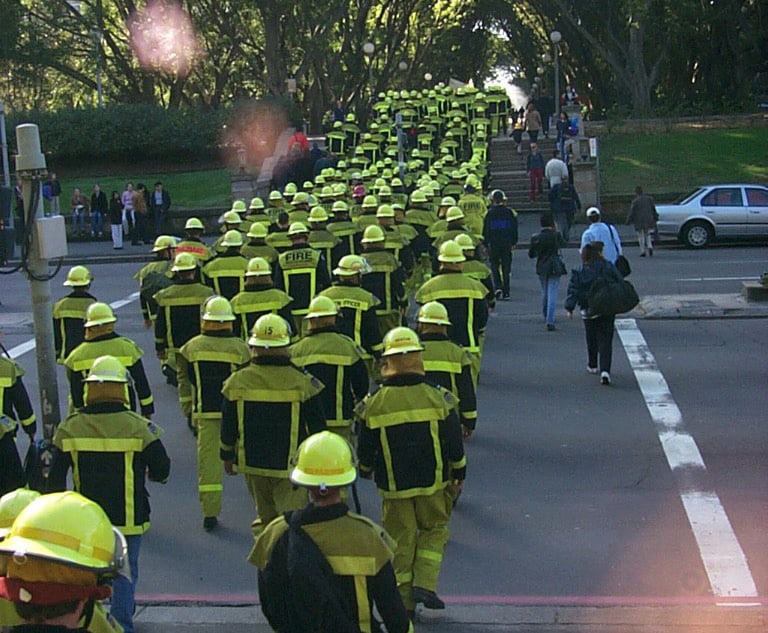 1999 – The Union begins its push for improved Death and Disability (D&D) benefits with a mass march on Parliament House and weeks of industrial action that sees half the permanent firefighter workforce refusing to turn out. The Union’s country staffing campaign leads to the introduction of permanent firefighter crews at 12 regional fire stations.

2000 – Ongoing industrial action over D&D benefits includes the first statewide stoppages of permanent members since the early 1980’s. The Union secures a further 17% in wage increases through new Permanent and Retained Awards.

2007 – FBEU joins the ACTU campaign to help defeat the Howard Coalition Government and its anti-worker Workchoices IR program. Union bans force the fire services to cease the use of dangerous PFOS foam.

2010 – Union centenary celebrations conclude with a 1,200 member CBD march and AGM, which institutes the 25 Year Membership Medal. FBEU members vote once again to sever UFUA ties and support over undemocratic rules and governance. The NSWFB is re-named FRNSW, and the Union reverts to its original Fire Brigade Employees’ Union of NSW title. 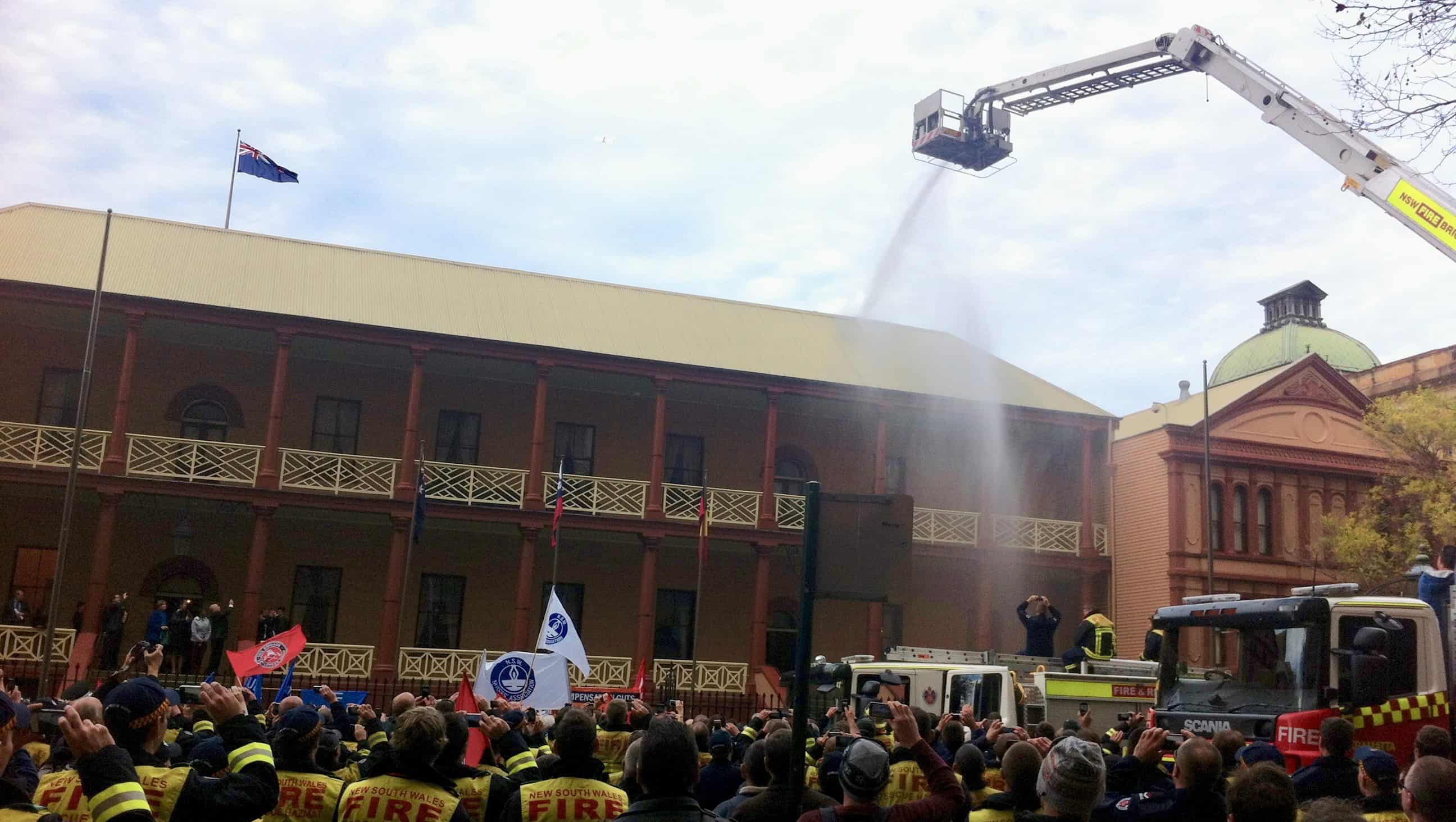