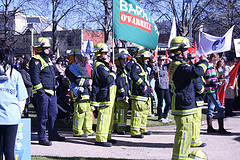 In SITREPs 17/2011 and 21/2011 we reported on the Department’s proposal to cease paying all course fees to OTEN up front and instead pay a member’s course fees on one occasion only, with members being expected to meet their own course costs after that. Following more than 12 months of negotiation and three appearances before the IRC the dispute was resolved this week with agreement that the Department will not only continue to pay all initial course fees for the first enrolment period (which will remain at 24 months), but will also now reimburse members who successfully complete a subsequent 12 month course. This agreement will apply both to members currently enrolled in OTEN courses and all future enrolments.

As part of this settlement the Department also agreed to provide additional support to members by writing to members throughout the course advising them of their progress, as well as providing reasonable assistance where requested. A Commissioner’s Order advising of the new agreed arrangements is expected to be published shortly.

Further to previous SITREPs reporting on the Department’s repeated refusal to recognise Easter Sunday as an additional public holiday, the Union this week filed an application with the IRC seeking orders to either grant consolidated leave to all permanent members who worked that day as Award subclause 6.4, or increase all permanent wage rates to reflect same. Hearing dates are yet to be set.

Rallying across the state

Members across the state have attended rallies against the O’Farrell Government’s changes to the Industrial Relations Act. One member, Tamworth brigade’s Gary Cork, summed up the issue well in his letter to the Northern Daily Leader yesterday where he wrote:

“Public sector workers are now dealt an impossible choice. They can give up nothing and in return watch their wages erode in real terms year after year, or they can sell off their conditions and watch the impact that will inevitably have on the quality of their family life, or they can give up jobs and watch their communities suffer from further under-resourced, under-staffed services.”

He goes on to say:

“Instead of having to make these impossible choices in the near future, many of our state’s public sector workers have instead decided to stand up and fight against these anti-worker, anti-family, anti-community and utterly shameful laws.”

To read the full letter and for a link to images from other regional rallies see below.