Another Rex another roaring success 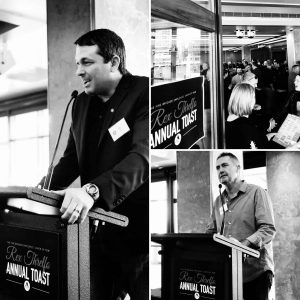 This week members gathered at Darling Harbour for the fifth Rex Threlfo Toast.

We reflected on our history, we looked to the future and we caught up with friends over a few drinks.

As committed the day was short on speeches, but there were a few short speeches.

Secretary Leighton Drury and President Mick Nairn said a few words, including thanking the SCOM for their work, solidarity and commitment our union. Mick gave Alison and Greg from the staff and special thanks for their decades of service and loyalty to the FBEU. Then Leighton and Mick gave the floor to Wayne Keevers who shared his experiences about what it means to be union.

Keevers was welcomed to the microphone with a cheer and spoke about looking after one another, having each other’s back, everyone doing their bit. He encouraged members to always stay strong, active and proud. He spoke about the role of our elected officials and the commitment and dedication of current and passed leaders.

In great FBEU tradition it wasn’t long before Keevers jumped the gun and encouraged everyone to boo him off the stage before the crowd did it anyway, collectively!

The Rex, again, was a great afternoon of unity and solidarity – reflecting on our proud history and looking to our strong, active and organised future.

I imagine that by now, some members have seen last Sunday’s newspaper article, in which issues relating to my usage of the union credit card were ventilated. Until now I had chosen not to make any comment, as I made the judgement that despite slurs against myself, it was not in the best interests of our Union to comment on slander and innuendo. By going to a newspaper, others have unfortunately dragged our Union’s good name into question and it is appropriate I put this to bed by making this statement.

I would like to take this opportunity to apologise to our membership for any embarrassment or concerns that this may have created with you as proud FBEU members, and be clear about what has- and hasn’t- happened.

Any personal purchases on the Union card were always self reported and identified to or by our financial officer, as well as State Committee, to prevent the possibility of Union funds accidentally being used to cover any non-Union expense. The account was always reimbursed in its’ entirety. The purchases were made under a usage process that I had assumed (incorrectly as it turned out), acceptable at the time, as it pre-dated me. The Union’s accounts of purchases are always scrutinised by both the financial officer (in account reconciliation time) and the State Committee (via a monthly review and sign off).

Earlier this year, it was identified that my usage of the card and subsequent reimbursement of purchases was in contravention of a policy. Once this was identified, I immediately rectified and addressed this and the State Committee voted on a way forward after detailed consideration. A plan was also put into place to assess both the policy and the practice to date, and to implement a review of how the Union’s card and other expenditure should be carried out (i.e. a financial policy review). Part of the State Committee plan includes being properly trained and to establish an extensive end of year audit relating to the card accounts to ensure proper probity. A report is to be compiled and presented to the membership at our upcoming AGM.

We have also set up a committee of members to look into this, and are awaiting final nominations from sub branches to begin this committee’s work. This committee will convene soon and report to our AGM.

I understand members may rightly be upset at the ‘bad look’ of our Union being in the newspapers, and I feel the same way. It has also been difficult to see people drag my family into this, and go to the papers rather than deal with this as unionists.

I look forward to seeing members at our AGM and I thank the members who have taken the time to call me and to attend meetings to ask questions.

Since my and this SCOM’s election, I have worked to deliver what I committed – a more active, engaged and organised Union. I want our Union to be on the front foot and tackling the big issues we face, like a wages policy that prevents us from improving our pay and conditions, major work health and safety issues impacting us on the job, and I want to support you to build the structures we need for you to have a say and actively campaign together, to win. With change comes challenges, and I am up for them. I know you are too.

I encourage you to get active in the work we are doing to be stronger, more organised, and more engaged. Strength in unity is not a slogan; it is a thing we do. And when we are united, no matter what we are faced with, we can win.

With the Government’s $12.9 million dollar cut to our recurrent budget and big ticket projects such as new PPC and the Plus Plan roll out adding to FRNSW’s bottom line, the Union and the Department met this week where it outlined its intentions to save millions by responding pumps with less than four firefighters. If that isn’t dangerous enough the Department has also proposed:

The Berejiklian government’s claim of ‘no cuts to the frontline’ appears to be false or they have not told FRNSW. More information has been requested of the Department and further updates will follow when news comes to hand. With our Award in the next six months, if there was ever a time to be united, it is now.