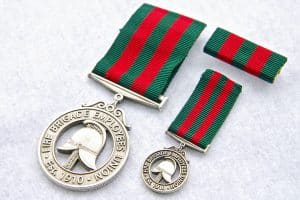 “That this meeting endorses the striking of a 25 Years Membership Medal in this, the Union’s Centenary year, to be henceforth awarded upon the State Committee of Management so resolving to members who attain 25 years membership of the Union and further, that this Medal take the same form as the draft artwork presented to this meeting, being of circular design and fashioned, on the obverse side, on the Union’s foundation badge and on the reverse side, to read ‘25 YEARS MEMBERSHIP’, and is to be suspended on a bar and 32mm riband of five myrtle and cardinal stripes of equal width, each stripe signifying five years’ membership.”

How it is awarded

The Union’s State Committee of Management may by resolution award the 25 Years Membership Medal to:

a)         any permanent member still employed within the industry who is of good standing and who has  attained  twenty five years or more membership of Union;

b)         any retained member still employed within the industry who is of good standing and who has attained twenty five years or more membership of Union;

Unbroken financial membership is not a pre-requisite for the award, provided that any break in membership while still employed within the industry shall be taken into account and in cases where the circumstances in the unfettered and uncontrolled opinion of the State Committee so warrant, the award may be withheld or, if already awarded, withdrawn.

The 25 Years Membership Medal is a circular medal in oxidised silver, 36 mm in diameter.

The front of the medal is fashioned on the Union’s original badge and features a brass helmet set within a disc carrying the inscription Fire Brigade Employees Union – Est. 1910.

The reverse side has the recipient’s name within a rim carrying the inscription 25 Years Membership.

The medal is suspended from a suspension bar which is an integral part of the medal.  The bar is slotted to take the ribbon. The ribbon is 32 mm wide with three myrtle and two cardinal vertical stripes of equal width, each stripe signifying five years’ membership.

The miniature of the medal is a half-sized replica, suspended from a miniature ribbon 16 mm wide.

The ribbon bar consists of a strip of full-size ribbon with no emblem.

The Fire Brigade Employees’ Union 25 Years Membership Medal ranks in precedence after all State and Territory Government awards, Fire and Rescue NSW awards, and bravery awards from organisations such as the Royal Humane Society. It precedes awards for long or meritorious service from non-government organisations, for example Surf Life Saving Australia, that have been approved for wearing with uniform.

There are no post-nominal entitlements for the 25 Years Membership Medal.

FRNSW Commissioner’s Orders 2011/22 confirmed the granting of permission for recipients of the Fire Brigade Employees’ Union 25 Years Membership Medal to wear this award with FRNSW uniform in accordance with FRNSW policy for the Wearing of Medals and Ribbons.

The Union’s State Committee of Management may in its absolute and uncontrolled discretion award, by resolution, the 25 Years Membership Medal to any former member of good standing who attained 25 years or more financial membership of Union, provided that any period of Associate membership shall not count towards the 25 years required for the awarding of the Medal and:

a)      in the case of eligible Life Members and financial Associate Members, the Medal shall be issued upon request (written or verbal) and free of charge; and

with presentation to be made whenever and wherever practicable, by a State Committee official and otherwise by arrangement with the Associate Member, former member or their relative.